Last year I challenged myself into writing an Atari 2600 emulator using Ruby in time to present it at RubyConfBr 2013 - thus ruby2600 was born. When I found Opal, a Ruby-to-JavaScript compiler, I felt it might be fun to run the emulator on a browser.

It runs even slower than in MRI and is far from polished, but works. To watch it, just click the button below and wait until the black lines get replaced by Pitfall Harry slooooowly running to the left (sorry, no key bindings for now).

Keep reading if you want the gory technical details!

Ruby2600 is fairly portable across Ruby interpreters (JRuby, for example, doubles its speed) and graphic libraries. A typical port consists on a script that:

HTML5 Canvas is the ideal place to render those frames, not only for its ability of addressing individual bits, but also for allowing horizontal stretch, which compensates Atari 2600’s rectangular pixels. So I wrote a minimal HTML, some rendering code and… 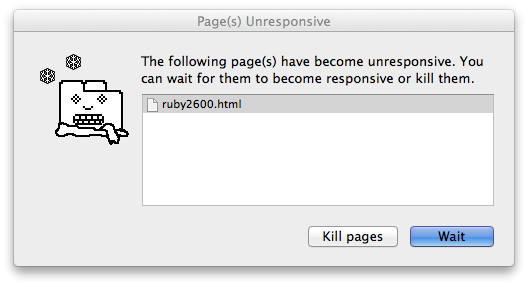 Generating a frame is CPU-intensive, and browsers don’t like functions that run for too long. The fix: expose a Bus#scanline method and render scanline-by-scanline chaining calls to setTimeout(..., 0), giving the browser some breathing space.

On my first run, the emulated game crashed straight after a few hundred CPU instructions. It would be a nightmare to debug, if ruby2600 did not have extensive automated tests (which I ended up migrating to RSpec 3 to get rid of deprecated syntax that did not please opal-rspec).

The specs revealed Opal missed bit indexing and had issues with peculiar cases of array expansion and binary shift. Those operations are seldom found in typical Ruby code, but are essential to ruby2600.

Open-source to the rescue: a few patches to Opal fixed these problems (one of the tests even made its way into Rubyspec), leaving me with one last problem: integer division.

Opal translates all numeric classes to JavaScript native numbers, which is great for performance and simplicity, but also makes it unable to tell 3 / 2 (=1) apart from 3.0 / 2 (=1.5). Had to wrap such divisions in ( ).to_i - a bit of noise, but a small price for the awesomeness of cross-compilation.

(Chrome also crashed before the inevitable fall into the crocodile lake, while Firefox kept going. Your mileage may vary.)

UPDATE: Seven months later, Chrome reached Firefox in terms of speed, and both seem faster running the same code (which would likely also get improvements from newer Opal and fixes suggested on comments). It shows how both browsers are actively improving JavaScript execution performance - a great competition that benefits everyone!