A year ago, Ben Heck hand-soldered an Atari 2600 on a protoboard (and, as usual, turned that into a portable console). The idea of manually re-assembling the console for which I had already hacked together a game and an emulator sounded very exciting (and educational) for me.

The show crew always publishes schematics for his projects, so while I waited for that, I started de-soldering the chips and cartrige conector (and a few extra components, why not?) from an old Atari Jr. board I had lying around. De-soldering is hard, but eventually it was done: 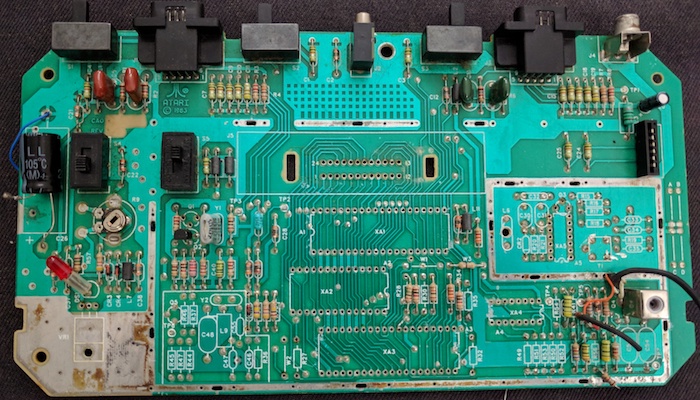 The schematics, however, never came. That episode’s GitHub repository only includes the original Atari’s block diagram, so I shelved the plan. But more recently I stumbled upon a series of blog posts in which David Barton describes how he built a 6502-based computer (a 65c02, to be precise) on a solder-less breadboard.

Those boards aren’t as sturdy or portable as traditional printed circuit boards, but the freedom to tinker (and make mistakes) sparked my flame once again, so I decided to give the project another shot. I started by reproducing his first two posts, but adapted to the Atari’s 6507 and adding a couple tweaks. 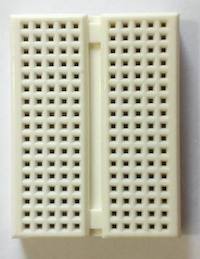 The first step was to position the 6507 on the breadboard - easy, yet I managed to mess up. I aligned the 6507 first pins with the numbered tracks, which sounds smart, but leaves little space to work on the first/last pins. If you are trying this, put the chip closer to the center and save yourself the trouble.

Here is the first version of the finished job. It isn’t super easy to follow (even in higher resolution, but check the UPDATE session below for a cleaner version and a drawing): 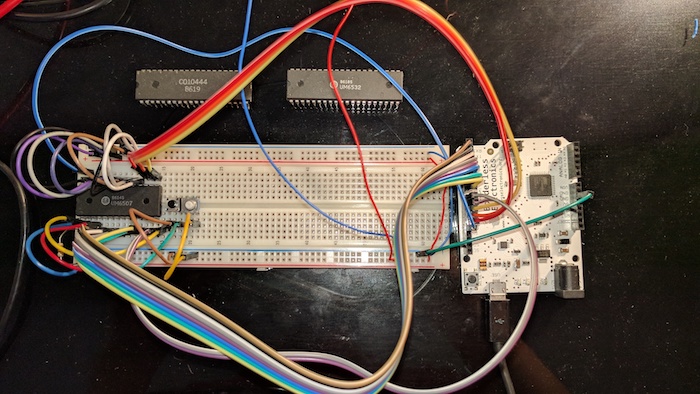 You may notice the other two Atari chips above (should have labeled them “SOON” 😎) and, more important, an Arduino wired to the breadboard. It has two functions:

I changed his code to read all 13 address bits on the 6507 (using Arduino’s digital pins 0-12, wired to the same-numbered 6507 address lines) and send the clock pulse via Arduino digital pin 13 (so I could “see” the clock pulses on my board’s built-in LED, which is hard-wired to that pin).

When I turned it on, I only got garbage.

To be precise: it worked as I expected for a few cycles, then went crazy. After pulling lots of hair that I don’t have, I figured the culprit: clock speed.

Barton’s code makes one clock pulse every second (i.e., 1Hz), which may be fine for a “modern” 65c02, but my old-school 6507 could not hold its state running that slow. Changing delay(1000) to delay(100) on his code gave our chip a blazing 10Hz speed - fast enough for it not to get lost, yet slow enough for human eyes to watch (without an oscilloscope).

Here is the modified code (gist):

Now comes the really fun part: watching the CPU work. With the power off, all pins on the address bus read as 0 bits, so the Arduino output starts like this:

When we turn the breadboard power on, things change a bit. First the CPU reads (or writes, who knows) a few addresses (most on the 0x01xx range, hinting a stack-related operation akin to the 6502 reset).

What really matters comes now: it reads the contents of the the addresses that match the NMI vector (canonically 0xFFFA and 0xFFFB, but we only have 13 address pins, so that will become 0x1FFA and 0x1FFB):

Honestly, I’d expect it to read the RESET vector (0xFFFC and 0xFFFD). But that must be why Atari carts have all all vectors pointing to the beginning of the code, not just RESET. Anyway, when you turn on the console, the CPU reads the address stored in those two bytes of the cartridge and starts running code from that address.

What happened now? Well, the CPU requested the contents of 0xAEA, but our breadboard’s response to any memory read is always the same: 11101010, or 0xEA. It just so happens that this value is the opcode of the NOP instruction, which tells CPU to do nothing (NOP = No OPeration), and just move on to the next memory address.

So the CPU did that, reading 0xAEB. But 0xAEB will also contain an NOP (every address will).

Can you guess the result?

We see each line twice because our monitor dumps the current addres at every CPU clock cycle, and the NOP instruction takes two cycles to run. This “free run” is said to be a rite of passage for computer builders. We had a good start, and could just pop the champagne.

But wait, there is more! Remember we added a button to pull down the RDY pin? If we press it, the CPU will ignore the clock cycles, but keep its state - in other words, it will pause.

Check it out - the CPU is there, free-running:

Around here I pressed the button…

…and the value doesn’t change anymore, until the button is released - when it continues as nothing happened:

For Atari programmers, this will sound familiar: Atari games need to sync their code with the scanlines that are drawn on the TV at a fixed speed, so they often write to the WSYNC address of TIA (the video chip) to halt the 6507 until the next scanline starts drawing. The TIA simply does what our finger did: sets that 6507 pin to GND until it has finished the current line.

My long-term goal/wish is to build an entire Atari on the breadboard. But I’m learning as I go, so who knows where I’ll get?

Anyway, I think the next steps should be:

Building from description may be a bit confusing, so I made a Fritzing (.fzz) drawing: 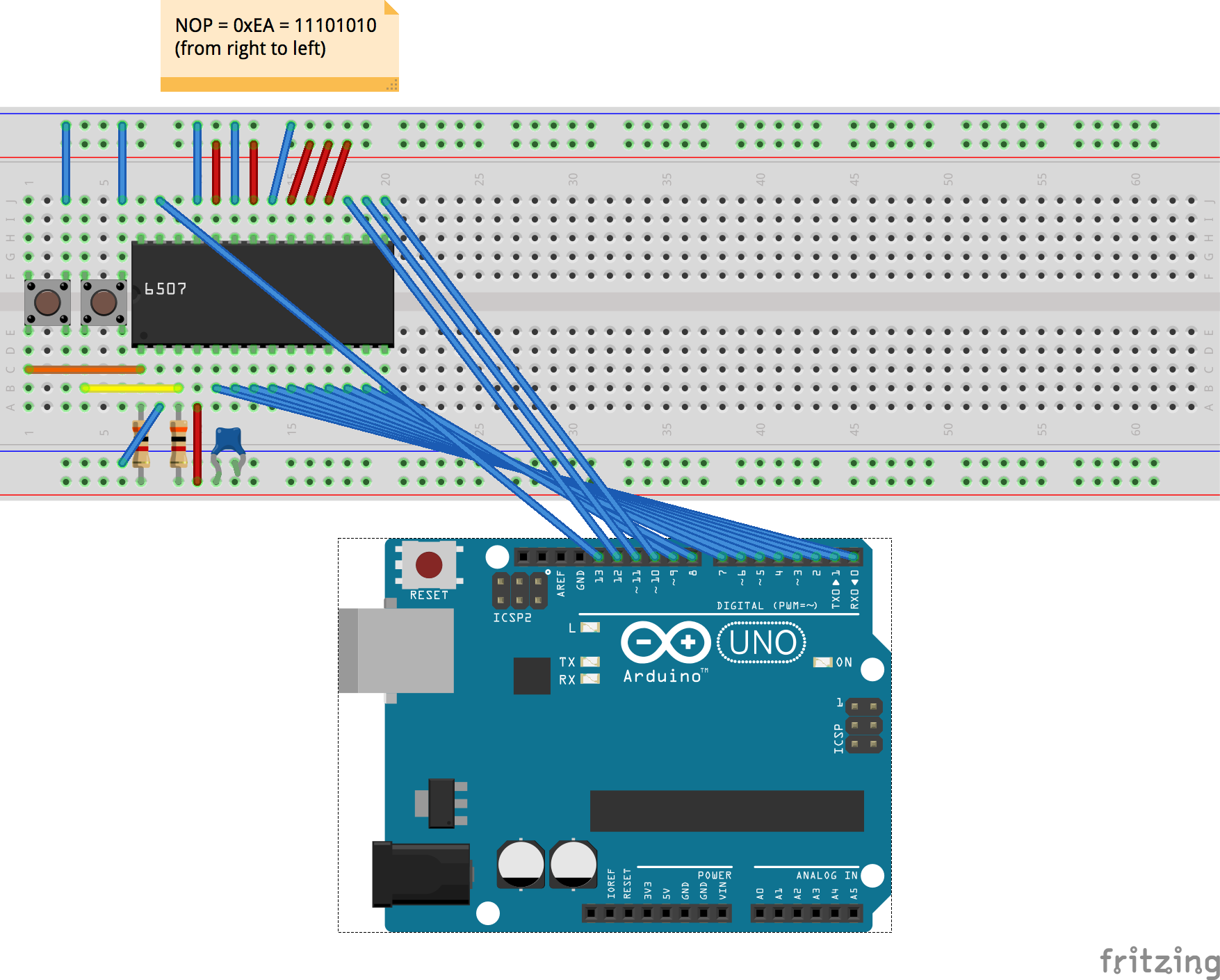 From that drawing, I rebuilt the experiment to weed out the last errors (🙏 ). Using shorter pieces of wire (except for the NOP and the Arduino connection, which will be removed as I add the other chips) and proper colors (red/blue for the 5V/GND connections, for example) resulted in a cleaner build:

A few years later, I’ve rebuilt this in order to figure out the next steps. And, of course, there was one last error!

I was having a hard time uploading the monitor for the second time, and noticed the last couple bits were a bit unstable. It turns out you should not use Arduino pins 0 and 1 if you are dumping serial output.

I am not sure how I managed to make this work before (maybe I was using a compatible board that did not reserve those pins for serial I/O), but I’ve changed the circuit to instead use pins 2-14, where “14” is actually analog pin A0 (which can be used as digital), and pin A5 for the clock.

I’ve also rewrote the monitor program, cleaning it up a quite a bit and printing actual ROM addresses: 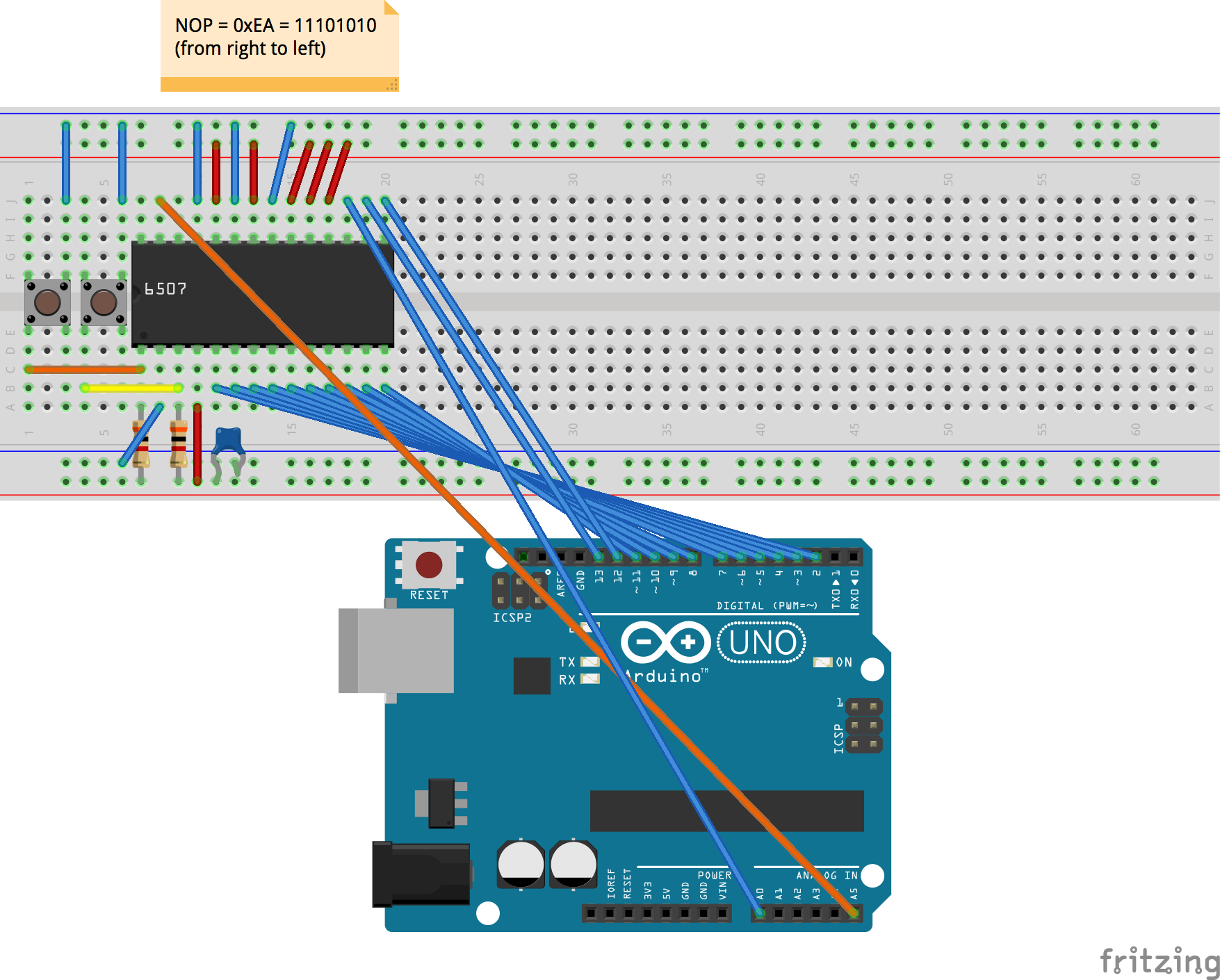 It seems to work all right now. I still get a couple odd results (notably, 0xFFFB and 0xFFFC instead of 0xFFFC and 0xFFFD` read when I press the RESET button, and the last ROM address being skipped), but they may be either 650x oddities, or imperfections from this monitor. Still, that puts me back on track to continue building up towards the Atari.